A Victory for Religious Liberty 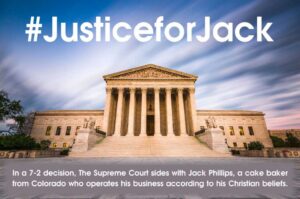 That collective “Praise God” you heard on Monday morning came from the body of Christ, His Church, in reaction to the U.S. Supreme Court decision in favor of Jack Phillips. The case, Masterpiece Cakeshop v. Colorado Civil Rights Commission was brought by Jack Phillips, its owner. The Colorado Civil Rights Commission sought to force the cake shop to employ its considerable artistic talents to craft a wedding cake for a same-sex marriage.

Family Heritage Alliance Action, along with 31 other Family Policy Councils nationwide, signed onto an amicus brief on September 17, 2017 in support of Jack and the Free Speech and Free Exercise Clauses of the First Amendment.

The facts in this case are simple and painfully clear. Jack Phillips determined that he must not, consistent with the tenets of his faith, use his artistic talents to design and bake a cake that would celebrate the union of a man and a man. For Jack, his participation in celebrating this union would render him culpable before God.

While the verbiage of the decision will be dissected, parsed and spun I want to share with you, in part, a message I received from a fellow family policy council director, Allen Whitt of the Family Policy Council of West Virginia.

“Jesus and Mohamed was both full of hate against the LGBTQAI community. And all of you following your skydaddy are using that silly myth to damage LGBTQAI citizens.” Robin Gomez , City Manager, Fairmont, West Virginia

I know it’s all our tendency to pick apart rulings and good news because we know the other shoe usually drops. But I share the above heinous quote that was spat into my face during a recent legislative battle for the following reason.

My fellow warriors, today’s decision sends a clear message to Robin Gomez and all the others in your states. Do that again to a business owner of faith and we, the Supreme Court of the United States of America, will stop it!

The hostility expressed by the Colorado Civil Rights Commission and the City Manager of Fairmont, West Virginia is becoming more common in the public sphere and is entirely unacceptable. It was a significant issue for the Court in this matter. This should remind us that we are to be salt and light while boldly defending our religious freedoms. This decision rightfully affirms that tolerance is a two-way street.

Praise God indeed. He has once again blessed all Americans of faith!!!