Abortions in South Dakota end as threats against pro-lifers increase

Since the leak of the Dobbs draft, a radical pro-abortion group called Jane’s Revenge has gone on a rampage of violence against pro-life organizations, churches, and pregnancy centers. 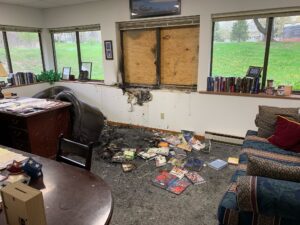 The group attacked our sister organization, Wisconsin Family Action, throwing two Molotov cocktails into their office, breaking windows, and lighting a fire in the building. The arsonists also vandalized the outside of the building with a message that read, “If abortions aren’t safe, then you aren’t either.”

Since then, Jane’s Revenge has targeted dozens of pro-life organizations around the country. Now, they are threatening to attack even more pro-lifers, declaring “open season” on crisis pregnancy centers and “anti-choice” groups.

The group posted a letter to its website bragging about how “easy and fun” it is to attack these organizations that are working to help mothers in need.

In the letter, Jane’s Revenge pointed to a 30-day deadline for pro-life groups to shut down and then threatened to dismantle the groups itself.

“From here forward, any anti-choice group who closes their doors, and stops operating will no longer be a target. But until you do, it’s open season, and we know where your operations are…Through attacking, we find joy, courage, and strip the veneer of impenetrability held by these violent institutions,” reads the letter.

This is nothing less than evil, and the group must be fully prosecuted.

The good news is that the left is scared because they know the battle lines for abortion are shifting. The pro-life movement is gaining momentum, and the left is becoming desperate.

After 52 attacks on pro-lifers in 46 days and continued threats, the FBI has finally announced an investigation. “The FBI is investigating a series of attacks and threats targeting pregnancy resource centers and faith-based organizations across the country,” said the FBI National Press Office in a statement.

Unfortunately, the continuation of these attacks has been made possible by weak leadership. Every elected official should condemn this violence and urge law enforcement to take immediate action.

Meanwhile in South Dakota, abortions have paused entirely. A spokesperson for the only Planned Parenthood facility in the state announced that the abortion clinic has paused scheduling abortions knowing that is it likely that South Dakota’s trigger law will go into effect very soon, as Roe is expected to be overturned any day now.

This is excellent news worth celebrating, but our work is far from over. We must continue to transform hearts and minds through intentional discipleship so that life at every stage is protected for years to come.

This news may also make pro-lifers in South Dakota more susceptible to attacks by radical groups like Jane’s Revenge. The more the pro-life movement gains ground, the more unhinged the left will become. If Roe is overturned, we can expect evil to be on full display in the form of violence against pro-lifers.

We must continue to stand firm in the fight against the greatest human rights violation of our lifetime, regardless of the persecution we may face.

“Blessed are those who are persecuted for righteousness’ sake, for theirs is the kingdom of heaven” (Matthew 5:10).