The pro-life movement has achieved a major victory with the overturning of Roe v. Wade. However, a new battlefield is already taking shape. Women are increasingly turning to chemical abortions, which end one life and traumatize another. 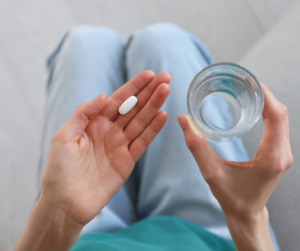 According to the Guttmacher Institute, abortions are no longer declining in the U.S., primarily because most abortions are now being done by chemicals rather than surgery.

Ending the life of an unborn child no longer requires a visit to an abortion clinic or even an in-person consultation with a doctor. Women can now obtain an abortion without ever leaving their home thanks to a two-drug combination approved by the Food and Drug Administration. This not only trivializes the act of abortion, but severs the vital doctor-patient relationship, leaving women isolated in a time of severe pain and distress.

During a chemical abortion, the first pill, mifepristone, blocks the natural hormone progesterone, which is necessary for pregnancy. The lack of progesterone prevents oxygen and nutrients from reaching the child, starving him or her to death.

The FDA has approved Mifepristone for use up to week 10 of pregnancy. At 10 weeks, a child has a heartbeat and his or her brain and lungs are developing. The baby has an obvious human shape.

If the child is not killed by the first pill, he or she will certainly be killed by the second. Misoprostol stimulates uterine contractions and expels the dead baby from the woman’s body.

Many women have spoken out about the horrors of chemical abortion, but the mainstream media continues to ignore them. “Within one hour I knew that everything the doctor had told me was a lie. I was bleeding so heavily, I believed I was dying. I was passing clots the size of baseballs, and I was in the worst physical pain of my life,” said one woman. Countless women are enduring this agonizing physical trauma in addition to the unimaginable trauma of losing their child and having to discard of the baby themselves.

The abortion industry and our federal agencies have failed women. They have led them to believe that inflicting deep physical and emotional damage upon themselves is the only way to achieve “freedom” or “equality.”

Abortion advocates even use the misleading term “medication abortion.” In reality, the abortion pill is poison to the female body and her growing child. It is “no more ‘medication’ than the chemicals used in lethal injections in capital punishment,” writes Isaac Book of the Daily Signal.

Chemical abortions are an excellent example of why changing the culture and individual hearts is the only real way to end abortion. Pills will always easily be smuggled and obtained. Only through transforming hearts and sharing the truth about the humanity of the unborn can we protect each and every mother and precious unborn life created by God.