South Dakota Must Save Women’s Sports 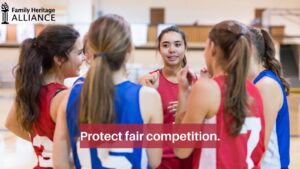 The issue of fairness in women’s sports had already been a hot topic of discussion before the story about “Lia” Thomas at UPenn broke. Thomas, a biological male, spent three seasons on the men’s swim team, but is now competing on the University of Pennsylvania’s female swim team and dominating the competition. He continues to crush records previously set by females, and his own teammates have expressed a desire to boycott given the unfair competition.

Thomas’ story is not the only one of its kind. During the 2019-2020 season, runner Jonathan Eastwood began competing with women at the University of Montana after a year of hormone therapy. Eastwood won the mile race at the women’s indoor conference championships and beat the second-place winner by four and half seconds. “It really hurts women’s athletics. It’s not fair. They have all these rules to keep a level playing field — drug testing and so on — but in this case, they turn a blind eye to it,” said Weber State coach Paul Pilkington.

The issue has even made its way to the Olympics. Weightlifter Laurel Hubbard, a biological male, competed against women in the Tokyo Olympics last year after competing among men for years. As a result, females from all countries were unfairly disadvantaged. Hubbard was even named New Zealand’s Sportswoman of the Year, a title that was stolen from a woman. In another case, transgender cyclist Rachel McKinnon, another biological male, took first place at a female cycling world championship. The list goes on.

As we know, men and women are biologically different, designed by God to be distinct. Allowing the two sexes to compete against each other simply isn’t fair. Studies show that even after hormone therapy transgender “women” still retain a physical advantage over biological women.

Numerous opportunities for scholarships and awards have been unjustly taken from female athletes, and their life-long hard work has been undermined by biological males who have taken the spotlight. Even with athletes from across the country speaking out, athletic organizations and educational institutions remain loyal to identity politics in complete disregard of Title IX, meant to establish equal opportunity for males and females. South Dakota needs legislation in place to protect the integrity of women’s sports.

Nine states already have laws in place to save women’s sports and 23 states, including South Dakota, are currently working on passing this type of legislation.

Legislation to protect women’s equal opportunity in sports is common sense. Every woman deserves an equal playing field where her success is encouraged, not hindered.