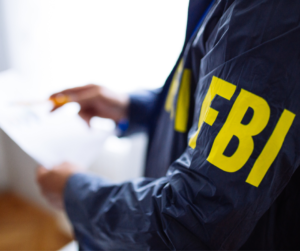 2021. The completely uncalled-for harassment from law enforcement reveals a clear double standard against pro-lifers from the Biden administration’s Department of Justice.

Early in the morning on September 23rd, a group of 25 to 30 FBI agents swarmed Houck’s home with his wife and children inside. With rifles pointed in firing position, they demanded that Houck opened the door and threatened to bust it down.

“The kids were all just screaming. It was all just very scary and traumatic,” said Houck’s wife. This was completely unnecessary trauma for his young children caused by an excessive use of force over a minor incident.

“Today a SWAT team broke down his door and put a gun in his face in front of his wife and kids for ‘restricting access’ to an abortion clinic,” said Catholic author and speaker Chris Stefanick continued. “Which he never did. Total, blatant, false charge against a man who poses no threat to justify a SWAT team.”

At the state level, the case was thrown out months ago. But the DOJ saw an opportunity to harass a prominent pro-life speaker and made their own case.

He was accused of violating the Freedom of Access to Clinic Entrances (FACE) Act, which prohibits the use of force to intimidate or prevent someone from receiving or providing an abortion.

While offering counseling on the sidewalk of an abortion clinic, Houck and his son were confronted by an abortion center “escort” who was yelling vile, insulting language and invading his 12-year-old son’s space. When the aggressor leaned forward, Houck pushed him to protect his son.

The Federalist reported that “as a matter of law, the facts of the private criminal complaint sworn out by [escort Bruce Love] do not constitute a violation of the FACE Act because Houck was standing at a corner away from the abortion facility, no clients were involved, and the alleged assault had nothing to do with so-called reproductive services.”

Houck’s attorney Peter Breen claims that President Joe Biden’s Justice Department is engaging in “political prosecution” by pushing the charges despite the fact that the case had been discarded.

Fellow pro-lifers and Houck’s team are highlighting the dangerous precedent that this incident sets. “The reality is that we’ve reached a point in our time where we have to stop pretending that we don’t know what it is that we [do] know. The unthinkable has arrived at our doorsteps and we better begin to [recognize] the unthinkable,” said family spokesperson Brian Middleton.

It’s clear that the agency has far too much power. If the FBI is able to aggressively raid a man’s home for simply protecting his young son with minimal force, then no parent is safe from our seemingly unhinged Justice Department.

This incident is also further evidence of a left-leaning, biased justice system. Ninety-eight violent attacks against churches and pro-life organizations by abortion extremists occurred following the leak of the Dobbs draft ruling, and not a single arrest has been made. Yet, the FBI is wasting judicial resources and taxpayer dollars targeting a harmless pro-lifer.

Evidently, the Biden administration’s priorities lie not in seeking true justice but in silencing conservative voices.

The American people and all representatives should join our Republican leaders in demanding transparency, accountability, and justice for the pro-life victims of the violent attacks since the Dobbs ruling. There is no excuse for such injustice and partisanship from our justice system.