The left is waging an Orwellian war on words

The Associated Press has revised its Stylebook to promote the propagandistic language and ideology of the LGBT movement. 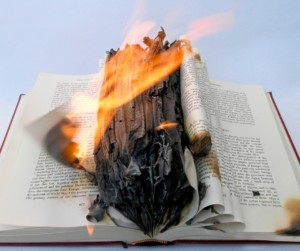 The AP Stylebook is an American English grammar and usage guide written by journalists working for or connected with the Associated Press. The new style guide defines the word “transgender” as “a person whose gender identity does not match their sex assigned at birth.”

The international news agency also advises writers to avoid terms like “biological sex,” “male or female hormones” and “sex change,” and instead use words such as “sex assigned at birth,” specific hormone names, and “gender transition.” The Stylebook also calls certain words “slurs,” such as using a transgender person’s previous name, or “deadname.”

Much of Big Tech and the media are in on this war against words too, as they frequently censor opinions they deem “hate speech.” Alliance Defending Freedom and Christian financial technology firm Inspire Insight conducted a study called the Viewpoint Diversity Score Business Index to uncover the extent to which the most influential U.S. companies protect free speech. The results were “abysmal.”

Further, Merriam-Webster’s online dictionary made a similar change by injecting radical gender ideology into its definitions of “male” and “female.” The secondary definition of “female,” now reads “having a gender identity that is the opposite of male.”

This is all part of a broader attempt to control speech and public opinion. “But if thought corrupts language, language can also corrupt thought,” writes George Orwell in 1984. By manipulating language and shaping it to reflect a specific ideology, our greatest cultural influences can control public thought.

Much like the Party in 1984, their goal is to erase all knowledge of “oldspeak” in order to enforce mass delusion. “Don’t you see that the whole aim of Newspeak is to narrow the range of thought?” Orwell writes. “In the end we shall make thought-crime literally impossible, because there will be no words in which to express it.”

The left is attempting to present their subjective and flawed worldview as fact. Users of the AP stylebook, Merriam-Webster’s online dictionary, and social media are being taught more than just what language to use, but how to view certain topics.

While the left continues to deny reality and manipulate language, it’s essential that Americans stand by the truth and refuse to become complacent. Every time an incorrect phrase is used, it should be corrected and clarified.

Christian commentator Allie Beth Stuckey recently poignantly stated this: “Reminder: Every time you use ‘preferred pronouns,’ you are validating a movement that is permanently sterilizing & deforming minors and allowing men into girls’ restrooms. You’re not being polite or empathetic. You’re being complicit in one of the gravest evils our culture faces.”

Anytime cultural influences aim to manipulate and control language to advance their own agenda, they should be called out and condemned. Language plays a vital role in shaping the culture, and the left’s war on words must be resisted and confronted head-on.